Over two thirds of SMEs want to reverse Brexit process, resulting in ‘fear of commitment’ – but confidence in government is growing 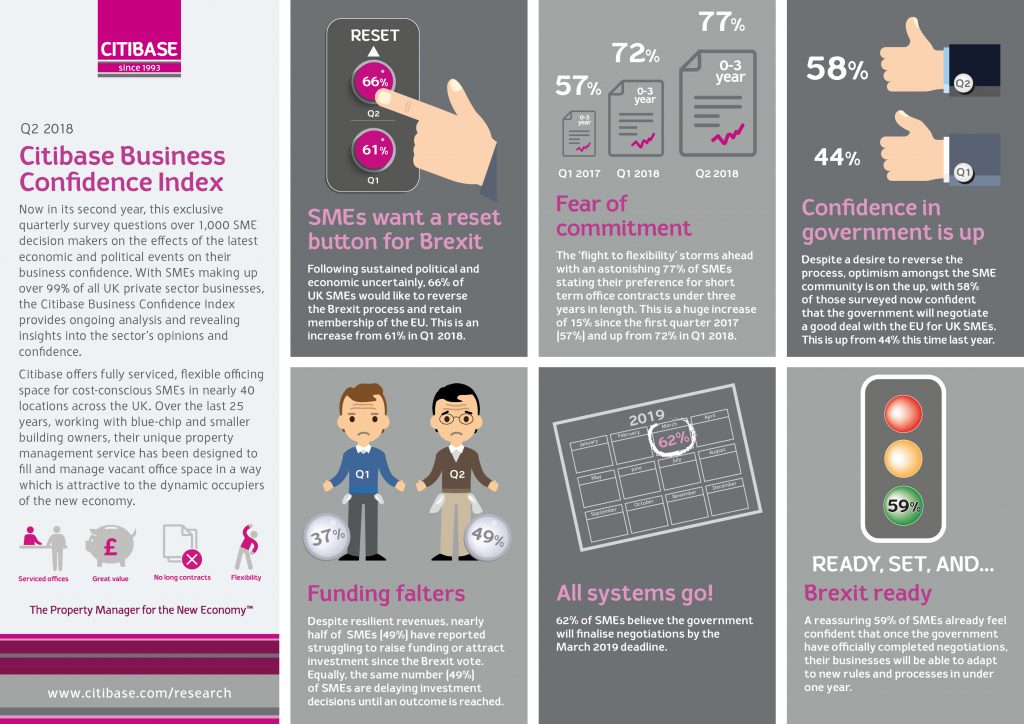 Following sustained political and economic uncertainty two years on from the Brexit vote, 66% of UK SMEs would like to reverse the Brexit process and retain membership to the EU, according to the latest exclusive Citibase Business Confidence Index. This is an increase from 61% from the last survey in Q1 2018. Interestingly, the nation […]

Following sustained political and economic uncertainty two years on from the Brexit vote, 66% of UK SMEs would like to reverse the Brexit process and retain membership to the EU, according to the latest exclusive Citibase Business Confidence Index. This is an increase from 61% from the last survey in Q1 2018. Interestingly, the nation is divided with 45% stating preference for a hard Brexit (down from 48% in Q1 2018) and 49% preferred a soft Brexit (up from 38% in Q1 2018).

The exclusive quarterly survey of over 1,000 SME decision makers by flexible officing champion Citibase, reveals that during this period of uncertainty, SMEs, start-ups and entrepreneurs are increasingly ‘fearful of commitment’, causing a boom in those seeking short term office contracts. Over three quarters (77%) of SMEs state they want terms of less than three years, marking a dramatic rise since the 2017 first quarter survey, when only 57% of SMEs stated that they wanted office contracts of less than three years and an increase from 72% in Q1 2018. This is particularly pronounced in the North East and London, with almost 9 out of ten SMEs favouring these shorter length office contracts.

As summer approaches, despite a desire to reverse the process, optimism amongst the SME community is on the up, with 58% of those surveyed (2017 Q2=44%) now confident that the government will negotiate a good deal with the EU for UK SMEs. The survey presents some stark regional variations however, with confidence highest among SME decision makers in London (76%), dropping to just 30% in the South West, reflecting conflicting views across the nation.

Furthermore, 62% of SMEs are confident that the Westminster government will finalise Brexit negotiations by the planned March 2019 deadline, a figure that peaks in London and the North East at 81%, whilst the Scots are the most pessimistic with just 25% being confident. Meanwhile, a reassuring 59% of SMEs already feel confident that once we have officially completed negotiations, their businesses will be able to adapt to new rules and processes in under one year.

Citibase also reveals that 67% have seen revenues either increase or stay the same since the decision to leave the EU, down from 78% in Q1 2018 and 75% one year ago, suggesting some SMEs are starting to feel the anticipated bite of Brexit on revenue. In addition to this, almost half of the respondents (49%) have reported struggling to raise funding or attract investment, up from 37% in Q1 2018.

In terms of office priorities, ‘flexible, short term contracts’, ‘high speed internet’ and ‘the ability to easily change the size of our space’ ranked as the three most important features (43%, 74% and 36% respectively) when it comes to choosing an office. Despite heightened publicity around the alleged trend of ‘hot desking’ and additional ‘lifestyle facilities’ such as an on-site bar and leisure spaces, these features ranked poorly (15% and 7% respectively) highlighting that what SMEs really need are functional spaces with flexible contracts that allow them to flourish, without the costly and unnecessary extras.

In Q1 this year, Theresa May was the most popular choice as the best suited leader to represent the UK in Brexit negotiations by an impressive 14% margin. This quarter however, SMEs feel that Theresa May and Jeremy Corbyn are equally suited to lead in Brexit negotiations, coming in at 26% each. This reflects a seeming renewal in confidence in the Labour leader, who only secured 12% of votes in Q1. Boris Johnson received 12% of votes, and there is equal support (5%) for Sadiq Khan and Michael Gove.

Steve Jude, Citibase CEO, comments: “It is clearer now than ever, that SMEs would prefer to reverse the Brexit process, realising that the jitters associated with it are simply not good for business. It is also clear that due to uncertainty brought on by Brexit, SMEs have ‘commitment issues’ and don’t want to tie themselves into risky traditional long office leases. They crave the flexibility and freedom that comes with flexible work spaces which don’t tie businesses down. It is also reassuring to see that over half of businesses feel that they will be able to adapt to new rules and regulations within a year of negotiations completing, suggesting a desire to ‘just get on with it’.”

And it’s not just our survey that highlights the flexible officing revolution. CBRE also found that 92% of building owners surveyed. agree that flexible office space is on the brink of becoming mainstream. With widespread media coverage regarding building owners losing vast sums of money, as traditional long leases become obsolete, smart building owners are increasingly turning to flexible office providers like Citibase, who can transform their underused spaces, whether a single floor or an entire building, into profit-generating assets packed with a vibrant community of SMEs.”

The exclusive quarterly Citibase Business Confidence Index, now in its second year, reflects the views of 1,043 small businesses across a wide variety of sectors including marketing, PR, financial services, travel and recruitment.

• Flexible short term contracts, high speed internet and the ability to easily change the size of your space were identified as the three most important office features (43%, 74% and 36% respectively).

• More than half of the SMEs surveyed (58%) are confident that the government will negotiate a good Brexit deal for them – an increase from 50% in Q1 2018.

• 62% of SMEs are confident that the government will finalise Brexit negotiations by the planned March 2019 deadline, spiking at 81% in London and the North East and dropping to just 25% in Scotland.

• SME decision makers feel that Theresa May (26%) and Jeremy Corbyn (26%) are equally suited to best lead the UK in the Brexit negotiations; followed by Boris Johnson (16%). There is equal support (5%) for Sadiq Khan and Michael Gove. Jeremy Corbyn experienced a 10% increase from Q1.

• Controlling immigration was identified as the most important priority for the Brexit negotiations (36%) in Q1, however in Q2 this percentage has fallen to 27% with negotiating strong trade deals taking the lead at 33%.

• London (79%) and the North East (78%) expressed the greatest desire to reverse the Brexit process, while Anglia/East Anglia expressed the lowest (33%)

• Short term office contracts under three years in length were the most popular in the North East (89%) and London (87%).
• SMEs in the Midlands appeared most resilient when it comes to revenue with 86% reporting an increase or no change since the Brexit vote, compared to only 58% in Scotland.

• London expressed the most confidence in the government’s ability to secure a good Brexit deal of any region (76% confident). Scotland was the least confident (15%)

• Theresa May was most popular in Wales (47%). The North East displayed the greatest confidence in Jeremy Corbyn of any region (43%). Nicola Sturgeon was the most popular choice in Scotland (30%), 15% more popular than Theresa May, having overtaken her for the first time in Q1 2018

• London, Yorkshire and the North West all placed the greatest importance on controlling immigration of any region (31%), while Scotland voted strongest for negotiating strong trade deals (55%)