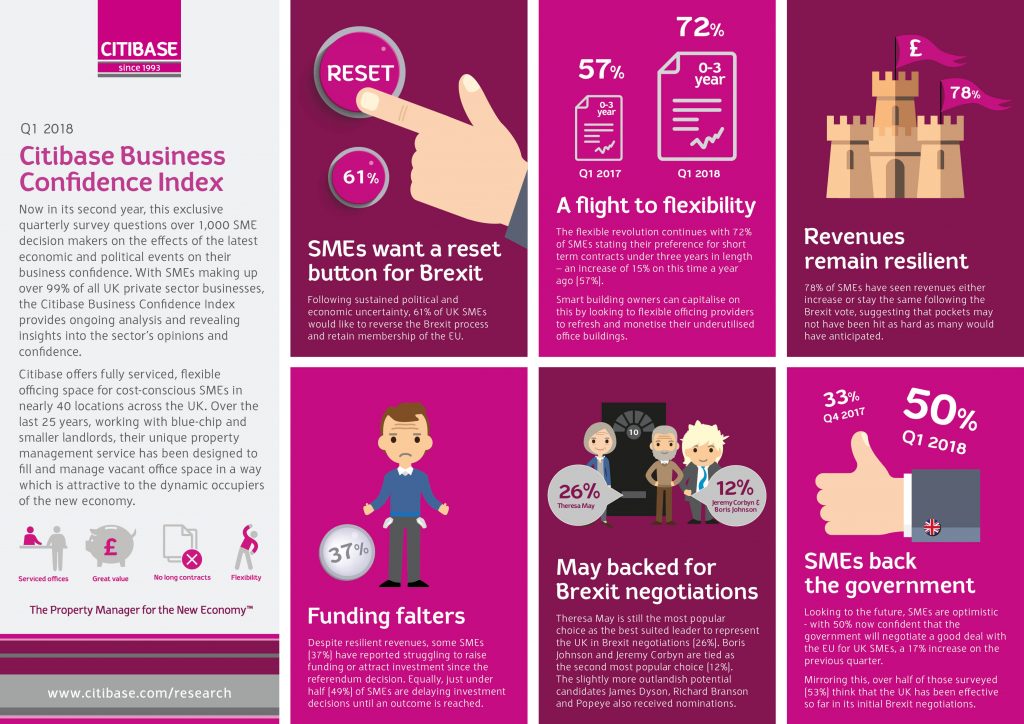 Following sustained political and economic uncertainty, 61% of UK SMEs would like to reverse the Brexit process and retain membership to the EU, according to the latest Citibase Business Confidence Index, now in its second year. The survey of 1,059 SME decision makers by Citibase, The Property Manager for the New Economy, also reveals that […]

Following sustained political and economic uncertainty, 61% of UK SMEs would like to reverse the Brexit process and retain membership to the EU, according to the latest Citibase Business Confidence Index, now in its second year.

The survey of 1,059 SME decision makers by Citibase, The Property Manager for the New Economy, also reveals that 78% have seen revenues either increase or stay the same since the decision to leave the UK, up from 75% one year ago, suggesting that pockets have not yet been hit as hard as many would have anticipated. Despite this, some SMEs (37%) have reported struggling to raise funding or attract investment, an issue that is most prominent in the North East (64%). Equally, just under half (49%) of SMEs are delaying investment decisions until an outcome is reached.

As spring approaches, the green shoots of optimism are starting to show, with 50% of those surveyed (2017 Q2=44%, Q3=35%, Q4=33%) now confident that the government will negotiate a good deal with the EU for UK SMEs. Mirroring this, 53% think that the UK has been effective so far in its initial Brexit negotiations, a figure that is particularly pronounced in London (75%) and the North East (73%). This figure drops to a mere 19% in Scotland and 25% in Yorkshire, highlighting strong differences of opinion across the UK.

During this period of uncertainty, cost-conscious SMEs are continuing to seek short-term flexible office contracts, with almost three quarters (72%) stating that they want terms of less than three years. This has risen dramatically since the 2017 first quarter survey (Q1 = 57%), and is particularly prominent in the North East (83%) and London (81%).

In terms of office priorities, ‘flexible, short term contracts’, ‘high speed internet’ and ‘the ability to easily change the size of our space’ ranked as the three most important features (42%, 74% and 41% respectively) when it comes to choosing an office. Despite grabbing the headlines as an alleged trend, the ability to hot desk and additional ‘lifestyle facilities’ such as an on-site bar and leisure spaces ranked very low, highlighting that what SMEs really need are functional spaces with flexible contracts that allow them to flourish, without the costly extras.

Despite internal leadership challenges and a Cabinet reshuffle which was met with a mixed response, Theresa May is still the most popular choice as the best suited leader to represent the UK in Brexit negotiations (26%), with an impressive 42% of Welsh SMEs giving her the vote. Boris Johnson and Jeremy Corbyn are now in joint second at 12% each, while in Scotland, Nicola Sturgeon is the most popular choice for the first time with 23% of votes, having overtaken by just 2% Theresa May, who was Q4 2017’s most popular choice. Despite stepping down from UKIP, Nigel Farage received a number of votes, as well as Richard Branson, James Dyson and even Popeye – suggesting that SMEs would like to see someone who has actually run a business at the helm of the ship.

Steve Jude, Citibase CEO, comments: “While on the surface confidence levels are up, the message from SMEs is clear – they would prefer to not be in this Brexit situation at all, as evidenced by 61% wanting to press the reset button on the entire process. As a result, these SMEs are cautious about the future and don’t want to commit to anything that may stifle their success, such as long-term office contracts that don’t allow them the flexibility they crave to be agile, successful businesses.”

“2017 also gave rise to the general trend of larger corporates taking flexible office space, showing that the benefits of agility and flexibility are wide-reaching, whether you are a small start-up or an established entity. Demand for flexible offices is continuing to soar across the country as businesses wake up to the flexible working revolution. Smart building owners can also benefit from this revolution in occupiers shunning traditional office leases, by turning to flexible providers like Citibase that can transform their underused spaces, whether single floors or entire buildings, into profit generating assets that support UK businesses.”

•  61% of SMEs would like to reverse the Brexit process and stay in the EU.

•  37% of SMEs have found it harder to raise funding or investment since the referendum.

•  Just under half (49%) of SMEs are delaying investment decisions because of Brexit.

•  Flexible short term contracts, high speed internet and the ability to easily change the size of your space were identified as the three most important office features (42%, 74% and 41% respectively).

•  Over half of the SMEs surveyed think that the UK’s representatives have approached the initial negotiations effectively (53%).

•  SMEs’ greatest concern going into negotiations is a reduction in overseas trade (29%), followed by the value of sterling falling (25%).

•  Controlling immigration was identified as the most important priority for the Brexit negotiations (36%), followed by negotiating strong trade deals (25%). Access to the single market was the main priority in Q4 2017 (29%).

•  London SMEs experienced the most positive effect on their revenue as a result of the Brexit vote (58% said their revenues had increased). The most negative impact on revenue was felt in the North East (26%).

•  London (73%) and the North East (72%) expressed the greatest desire to reverse the Brexit process. Wales was the region with the least desire to do so (25%).

•  Short term office contracts under three years in length were the most popular in the North East (83%) and London (81%).

•  London expressed the most confidence in the government’s ability to secure a good Brexit deal of any region (70% confident). Scotland was the least confident (14% confident, 63% not confident).

•  The North East placed the greatest importance on controlling immigration of any region (51%). The South East identified access to the single market as the most key priority (28%).